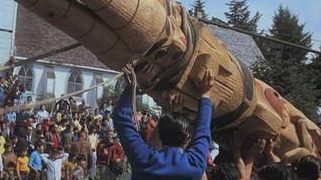 Now is the Time

When renowned Haida carver Robert Davidson was 22 years old, he was instrumental in changing the history of his people when he committed to carving the first new totem pole in Old Massett in almost a century. On the 50th anniversary of the pole’s raising, Haida filmmaker Christopher Auchter steps through history to revisit that day in August 1969, when the entire village gathered to celebrate the event that would signal the rebirth of the Haida spirit.