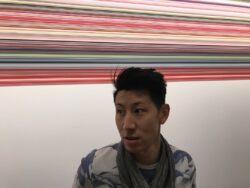 Howie Shia is a Saskatoon-born illustrator, animator and writer. His work has received several nominations and awards, including the 2007 Tokyo Anime Fair Grand Prix for Flutter and Canadian Screen Award nominations for his 2015 short BAM and his 2021 short 4 North A (written and co-directed by Jordan Canning). In addition to creating, writing and directing for Disney, Freemantle and Teletoon, Howie enjoys a fruitful ongoing relationship with the National Film Board of Canada. As an illustrator, he has worked for clients as varied as Nike, Amnesty International and Donnie McCaslin (leader of David Bowie’s Blackstar band). Howie co-founded the music, film and design studio PPF House with his brothers. He is currently working on Michael Green and Amber Noizumi’s new Netflix series, Blue Eye Samurai, as well as finishing a children’s book and developing two new animated series.